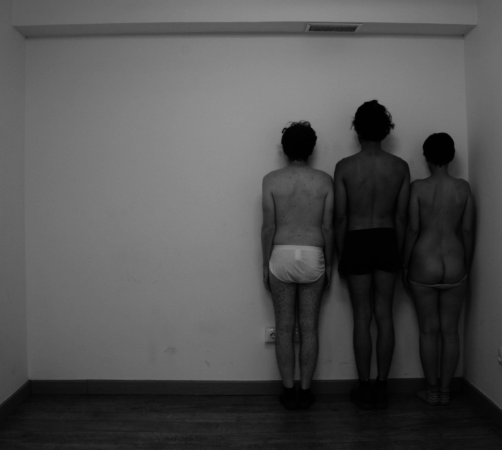 Barbecho/Floración (Fallow/Flowering) is a project that delves into the contemporary notions of self-exploitation, dystopia and ecotechnology. In this work, the Vértebro art group reflects on their status as a collective —a stage-producing entity which coordinates thoughts and actions around the performing arts— while they aim to re-generate through a series of meetings that will take place in 2020 and 2021.

Barbecho (Fallow land) is the name of the phase the company will be working on during the last quarter of 2020 at the Centre for Creation of Dance and Performing Arts, El Graner (Barcelona). A decelerated period in which they plan to rethink their “collective methodologies” and test new practices and inspirations with other members of El Graner community.

Floración (Flowering), the next phase, will then take place in 2021 during the TNT festival. This work will stage the reflections, praxes and applications of whatever creative findings arose from the previous phase. These shall generate a series of stage works full of new parameters, including those portrayed in the company’s Díptico por la identidad project, enacted over the last six years.

In the next two years, Barbecho/Floración will take on different forms depending on the context: a pseudo school programme, a temporary and uncertain school, a collateral curatorial practice extended over time. All of this follows the footsteps of “Beautiful Movers”, a miraculous gathering space during which the company tried to save all kind of artistic practices. For Vértebro, it is a question of taking time away from traditional production systems and thinking as an art collective, allowing themselves to be nourished and affected, to learn new strategies and build on top of their previous notions of authorship, with a view to their future productions.

Ángela López, Juan Diego Calzada and Nazario Díaz make up the Vértebro group. Since they formed in 2007, they have enacted several stage proposals made up of a particular mix of disciplines, unrolling the Andalusian imagination to its full potential. Their works have been presented in national and international spaces such as Reims Scenes de Europa (France), Encuentro Internacional de Artes Vivas de Tlalpan (Mexico), Terrassa Noves Tendències, ALT Vigo or SALMON< Festival de Barcelona, among others.

Vértebro curated “Beautiful Movers” in Córdoba, a miracle-meeting for the contemporary scene with creators such as Rodrigo García, Idoia Zabaleta, Sociedad Doctor Alonso, El Conde de Torrefiel, Patricia Caballero or Pilar Albarracín. Since 2013, Vértebro has been carrying out —in their project Díptico por la identidad (Diptych for identity)— a series of actions around the concept of identity, recreating a context of thought and action that gives voice to permeable concepts such as gender, faith, politics or sexuality. In 2018, Dios Tiene Vagina (God Has a Vagina), Díptico por la identidad Part I, was given the PAD Award for best show, awarded by the Andalusian Association of Dance Professionals.

With a firm desire to erect a different order of things and expand their creativity to new formats and contexts, Vértebro has collaborated with thinkers and activists such as Brigitte Vasallo and Gabriela Wiener, with the Association of Transgender Children Todes Transformando Córdoba or the Forum for the Historical Memory of Córdoba, among others.